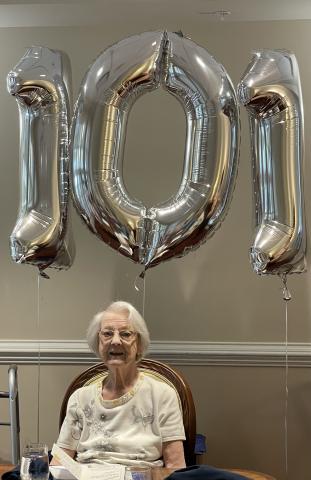 When I learned that I would have the opportunity to interview Helen Sheriff, just one day after her 101st birthday, my mind began racing with what questions I would ask her. After all, where do you begin with someone who has been through so many significant world events and life experiences? After jotting down a few questions in my notebook, I decided to go in with an open mind and just let the conversation flow.

As I approached Mrs. Sheriff’s apartment, a beautiful piece of needlework caught my eye. Hanging on the wall, outside her apartment door, was a hand-stitched portrait of an ancient Egyptian woman. The rich colors of her apparel and intricate detail were stunning.

This was our first meeting and after introducing myself, Mrs. Sheriff welcomed me into her apartment. She was excited to have a visitor and offered me a seat, instantly making me feel at home. As I settled myself and opened my notebook for the interview, I noticed two other striking pieces of needlework on the wall. I wondered if these were her own handiwork or collected from some travels.

My first impression of Helen Sheriff was how amazing she looked at 101 years old. She was dressed for spring in her pastel, yellow pants and cream sweater, embroidered with little flowers along the collar. She sat up very straight and alert, ready for me to ask whatever I wanted.

The second thing I noticed was her sharp sense of humor and quick wit, as she cracked a funny joke that made me chuckle. I had a feeling this would be a fun visit and couldn’t wait to get started.

Helen Baker was born on June 14, 1921 and grew up in Durham, England. She was the 5th out of 7 children. Growing up, Helen loved to read, something she has continued to enjoy throughout her life. Every spare moment was spent with a book, including on her way to school each day. As we talked about life growing up in England, we discussed the Royal Family and the Queen’s recent Platinum Jubilee. Mrs. Sheriff described how she used to snip pictures and articles about the Royals from the local papers, pasting them on brown paper and creating her own little history books. Years later when she moved to the States, she donated these booklets to a local English school. She told me she was proud to leave these behind for future generations to enjoy.

When Mrs. Sheriff mentioned her late husband, I asked her how they met and knew I was in for a good story. Her face immediately lit up with a bright, youthful smile, “Oh it’s a silly story really.” Helen was 18 years old when they first met; she had come down with a sore throat and the new, local doctor was asked to make a house call. This young doctor happened to be her future husband, Denys Sheriff. Dr. Sheriff had recently graduated, in 1938, from Durham University Medical School in Newcastle, England. After leaving the house, Helen told her mother, “Wow, he is so cute!” The feeling was mutual, because the very next day Helen received a letter from Denys. From then on, they were inseparable and quickly fell in love, getting married just a few short months later.

As we continued chatting, I noticed two black and white photos, placed on the table next to her sofa. One was of a young, handsome Dr. Sheriff in his mustache and spectacles, the other, of younger Helen, posed outdoors under a tree. When I pointed out the photographs, Mrs. Sheriff handed them to me for a closer look. I could tell she loved sharing these with a new friend as she reflected on her happy memories with Dr. Sheriff.

Just one day after Helen and Denys returned from their honeymoon in Scotland, war was declared against Germany. They had one year of marriage together before Dr. Sheriff was sent away with the Royal Army Medical Corps. During his absence, Helen spent time working in the office of an aircraft manufacturer. When I asked if she enjoyed working in the office, her enthusiastic response was, “Oh yes!”. She reminisced on fun times with her coworkers and told me how they would attend various plays and musical events that were put on by the British government to boost the people’s spirits. Amidst these festivities however, war was waging and “life was hard”, said Mrs. Sheriff. She recalled how supplies were in short demand and shelves were bare; air raids were also a common occurrence.

Following the war, times were tough in England, and in 1957, Dr. Sheriff and Helen made the move to the United States along with their four children. They first lived in Petersburg before settling in South Boston, Virginia where Dr. Sheriff practiced medicine for the next twenty years. While it took some time to adjust to the American way of life and the accent, Mrs. Sheriff has come to lovingly consider the U.S. as her home.

While Dr. Sheriff kept busy with his practice, Mrs. Sheriff dedicated her time to raising their four children, Alan, John, Jean and Rita. As the years went by and the children had families of their own, Denys and Helen welcomed 11 grandchildren. In 1992, the couple moved to Williamsburg and enjoyed 3 more years together before his passing in 1995. When I asked how many great-grandchildren she had, Mrs. Sheriff laughingly shrugged her shoulders and told me there were too many to remember. I later confirmed with her daughter that she has 22 grandchildren.

It was at this point in the conversation that I asked if she had any special interests or hobbies, hoping that she would tell me about the beautiful needlework I had observed earlier. Sure enough, her first response to my question was “needlework!”. “My hands were never idle” she said, “always stitching something, always sewing and giving pieces away as I finished them”. She pointed to an elaborate, gold framed picture of King Tut and then to a tall portrait of a Scottish bagpiper, displayed in her living room. She learned to sew from a young age and before she was 10 years old, she had accomplished the difficult task of sewing socks with heels and toes. She also pointed out the cream, crocheted blanket and throw pillows, with hand-stitched designs, laying on her couch. Although her fading eyesight no longer allows her to sew as she used to, she still has the same passion and excitement for her old hobby.

Travel was another passion, shared by both Dr. and Mrs. Sheriff. Once their children had grown, the couple spent the 1970’s, 80’s and 90’s traveling all around the world. Mrs. Sheriff spoke enthusiastically of experiencing new cultures, always wanting to travel somewhere “further and further away”. When asked if she had a favorite place her response was, “I don’t have a favorite, they were all unique in their own way. There was something special about each place.”

As our conversation came to an end, I thanked her for her time and told her how I hoped to visit England someday in the near future. She told me to be sure and visit the Lake District in Northwest England, known for its beautiful daffodils. As she reflected on her visit to see the daffodils, she began quoting a poem lyric by William Wordworth entitled, “I Wandered Lonely as a Cloud”.  Mrs. Sheriff continued to recite the poem in its entirety from memory, never skipping a beat.

“I wandered lonely as a cloud

That floats on high o'er vales and hills,

When all at once I saw a crowd,

A host, of golden daffodils;

Beside the lake, beneath the trees,

Fluttering and dancing in the breeze…”

There is so much more I could say about my time with Helen Sheriff, but I will leave it there. What a pleasure it was to sit back and spend a little time together. Her sense of humor and view on life left me feeling so appreciative for the special people that call Williamsburg Landing their home. 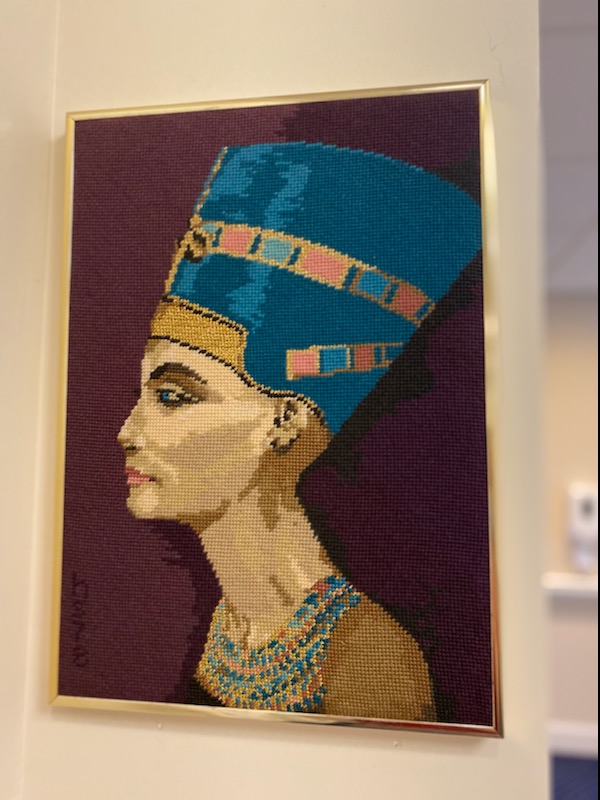 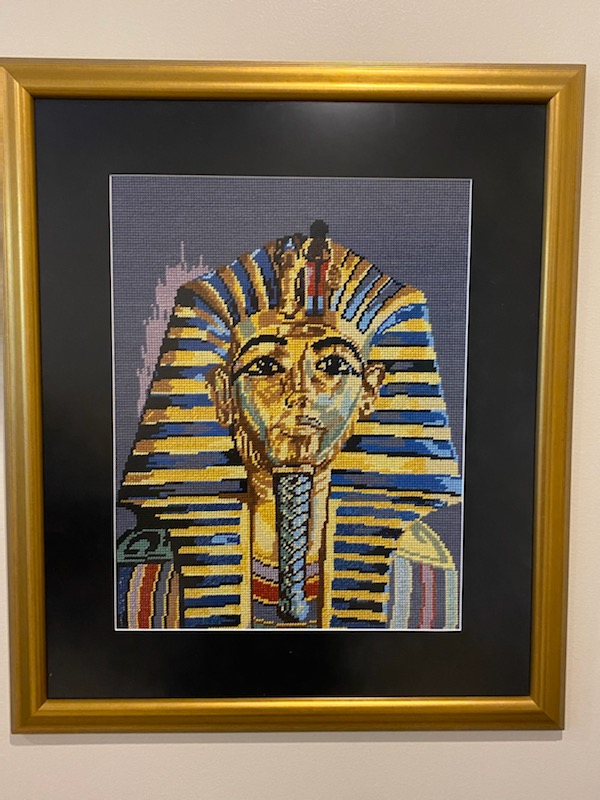